This in response to Laura’s suggested technique 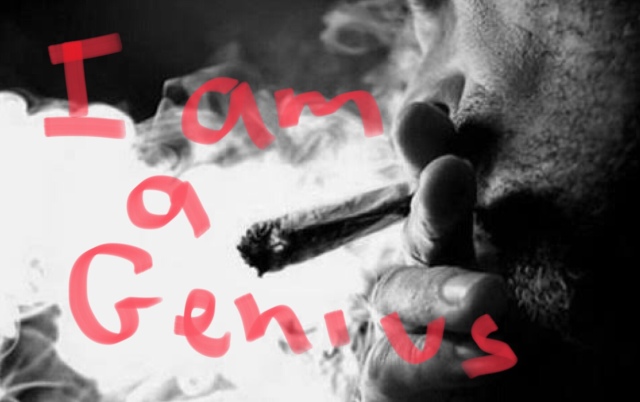 Another life time ago I had a casual relationship with substances which transformed me into a genius. Such was the magnitude of this genius that it poured out onto the page like lava and my fingers burned late into the night with the effort of harnessing it and recording it so that, after a little editing, it could be shared with humanity and I might then assume my rightful position on the world stage amongst the other literary heavyweights.

The morning’s editing process invariably proved to be a little more complicated than the enthusiasm of the previous evening might have suggested. Quite aside from the fact that the handwriting was virtually indecipherable and the grammar non-existent the content itself was unintelligible. In this state of non-heightened sensitivity I could not recognise my own genius. It seemed unlikely that the world would either.

I tried doing things the other way around. I would write the usual rubbish with sober fingers during the day and then wait for the magic to arrive at night to extract the diamonds. This didn’t work either. For at night these pieces would transform themselves into works of art without even a touch. “Are you kidding?” I would ask myself when viewing them through the eyes of the genius, “This needs no editing. It is already fucking brilliant.” I could then sit in a comfy chair and watch re-runs of Gilligan’s Island. Or The Beverly Hillbillies. It turns out that they were comic masterpieces as well, and this observation may have provided further insight into the process.

One thought on “Writing on another planet, editing at the kitchen table”